8/24/10 An Eli Story - Or Incident at the Dance Festival
The Year: 1967.  Our Theme: Yom Ha'Atzmaut.  Music Used: Hora Mezra, Nivneh Artzeinu.  Leader Rena Epstein.  Participants: Leah Edelstein, Mottie Lederman, Elana Leventhal, Mella Polacheck, Sara Rosenberg, Hank Scheiber, Tova Twersky, Chava Weiss, George Feldman, Tom Kovary, Chuck Waxman and Eli.
We had short sticks with Israeli flags on them that were to be unfurled at the end of our performance. (our Tass during Nivneh Artzeinu was superb - what did you expect!). At one point (during Hora Mezra?) we were in two lines facing the audience; Motti Lederman was in front of Eli; Eli dropped his stick and it rolled toward Motti; Motti picked it up without skipping a beat, threw it backwards to Eli; Eli caught it (without his glasses!); and of course the flag unfurled as it was being tossed back - what an ovation. 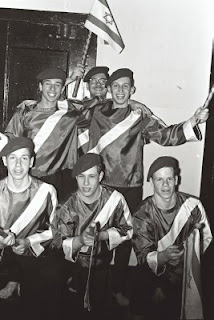 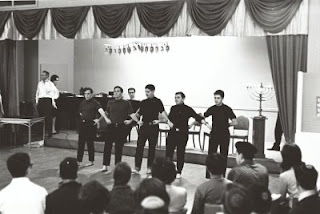 The 1st picture is from the '67 festival.  The other picture is from a 3rd Seder Performance we did (don't remember the year or the place)
Bivrachat Shalom v Tel Hai
Shachna Waxman

~~~~~~~~~~~~~~~~~~~~~~~~~~~~~~~~~~~~~~~~~~~~~~
David Kandel shares the following stories:
During the 1967 camp season I was a counselor and Eli was doing ‘maintenance’. More often then not it meant trying to coax some life out of the insanely designed camp sewage system that was probably laid out by Moe, Larry and Curly…on a bad day!
Anyway, I had a poor camper in my bunk that didn’t like the other kids, hated sports and camp, but was ‘otherwise’ having a great time (not).  The amazing thing was that this kid, whose parents spent good money to enjoy the country life and camp (or possibly just to get him into another county for the summer) ended up latching onto Eli as he made his daily rounds fixing toilets and unclogging the drainage system. The little boy would put on rubber boots and proudly carry his plunger as he became the Sancho Panza to Eli’s Don Quixote of the plumbing circuit. The little unhappy camper finally was happy and found purpose in life as Eli made him his assistant in their never ending quest to vanquish miscreant plumbing. Eli was great with him and treated him like his coworker. An amazing sight for those of us who were at Camp that year.

~~~~~~~~~
I was fortunate enough (and old enough) to have been at the wedding of Eli and Rena. The part that I still remember to this day (or perhaps yesterday) was the part of the wedding where the bride and groom are seated in the middle of the dance floor and the intoxicated guests and relatives do all kinds of frenetic and often cardiac inducing dances in front of the couple.

~~~~~~~~~
After an assortment of would be enthusiasts and exhibitionists did their little ‘shticks’ for the bride and groom, Mr. Feldman whirls out onto the floor and places a wine glass in front of the newly weds. After frenetically dancing around, he then places his arms straight out in front of himself and proceeds to fall straight down, catching himself in a perfect pushup position, then lowers himself onto the glass, which he then picks up with his teeth and drains!
After concluding his act, he then gestured for Eli to do what he had just done. Now, the average person attempting that feat would probably have ended up in the emergency room as their next of kin attempted to explain why the individual had his nose impaled on a wine glass. And Eli, despite what ever he may have consumed, was wise enough to understand that. So after dancing around at about a third the speed of his predecessor, he then slowly dropped to his knees, bent over and picked up the glass, put it in his mouth and drained the glass.  It was classic Eli.
I have already told my daughter that when she gets married, I’m going to do the same thing. So I’d better start practicing and keep the number for EMS on my speed dial.

Heck, it was more difficult when we had to turn our swords into plowshares, er, spades, and then put someone (?) on our shoulders.