Rabbi Pinchas Stolper Z"L, husband of Elaine, brother of Dr. Daniel Stolper and brother-in-law to Naomi Stolper died on May 25, 2022. He is to be buried at Har Hamenuchot Cemetery in Jerusalem.

Rabbi Stolper was the first full-time national director of NCSY and subsequently assumed a broader role in communal leadership, serving as Executive Vice President of the Union of Orthodox Jewish Congregations of America for eighteen years.

Rabbi Stolper was a widely respected teacher, educator, and thinker. A devoted disciple of Rabbi Yitzchak Hutner, he was a musmach of the Mesivta Rabbi Chaim Berlin / Gur Aryeh Kollel and held degrees from Brooklyn College and the Graduate Faculty of the New School for Social Research. A prolific writer and editor, he was responsible for over 20 volumes and hundreds of articles on Jewish life and thought.

In his youth, he was a leader of Betar.

One of the more public events of that period was the protest in 1950 against the German soccer team's visit to New York. 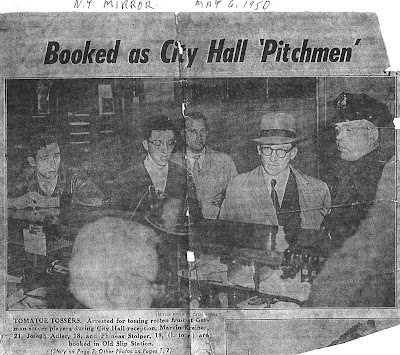 The JTA reported on May 8:

Three youths arrested after they identified themselves with the Betar youth organization after they and a dozen other young men and women threw eggs, tomatoes and apples at a visiting German soccer team on the steps of City Hall on Friday will be given a hearing on Thursday, it was reported during the week-end. The demonstration took place as the German athletes, affiliated with the Hamburg Sports Verein, were about to be photographed with Acting Mayor Vincent Impelliteri.
Statements issued by the Union Zionists-Revisionsts of America and the Betar executive committee condoned the action of the youths and protested a charge that the demonstrators were Communists. The Betar statement said it was “regrettable that news of the reception (for the Germans) did not leak out earlier, in time to permit a much greater manifestation of dissatisfaction” by the Jews of New York. A spokesman for the visiting Germans, commenting on the incident, said: “We could see that they (the Betar youths) were not Americans.” 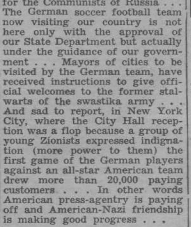 According to Winkie Medad who spoke with him concerning that period of time, he ordered religious Betarim to insert their tzitziyot inside their pants pockets.

Batya Medad also recalls him relating instances of his Betar period and shares this photograph with him, receiving a NCSY award from him: 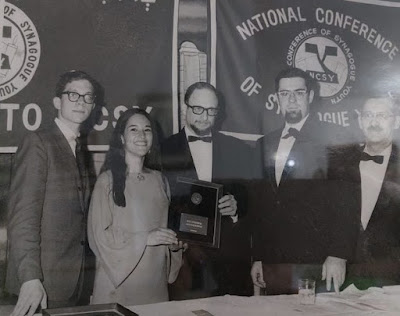 I knew Pinchas Stolper from 1949 in his various roles in Betar, which I joined in the spring of 1949.  We first met at a demonstration of Betar in front of City Hall, which was visited by the first German soccer team to visit the US after WWII. The Betarim bought rotten tomatoes and vegetables from the nearby fruit & vegetable market and pelted the soccer players. All the photographers just turned around and kept shooting. Pinchas Stolper, Dov Troy and Motel Kreiner were arrested. [Steve Adler: 'It was not Troy but my brother Joe who got arrested. Mayor O'Dwyer's brother Paul was the the lawyer who got them out] When their case came to a hearing, the police were not able to identify them, so the case was dismissed. This demonstration received front page coverage in all New York and US newspapers.
Pinchas became Natziv Betar in the US and helped to supervise Camp Betar. I remember that early in the morning he put on his Talit and Tfillin and wore them all day while helping activities of the campers.
Pinchas married Elaine and they both made Aliyah. They both made the mistake of residing in Bnei Brak. They would have been fine anywhere else, but the Bnei Brak wives considered Elaine to be a Shiksa because she wore her sleeves half an inch above her hands. She and Pinchas were so disturbed by this, that they returned to America rather than move to another city.
Pinchas as well as Troy and Morty all graced the front pages of ALL the New York newspapers and many national papers. They were actually throwing rotten fruits and vegetables at the soccer players. The mayor did not even come, but sent an assistant.