Before beginning our story, I would like to apologize to all the chevra, and especially to Marcie, for the delay in posting this story. We had severe technical difficulties getting the videos we shot off of David’s iPhone, and then I couldn’t find an application to flip it right side up.  But now all is well in Camp Betar, so sit back, relax; close your eyes – no! you can’t close your eyes, you won’t be able to
read the story - read and let the memories and the tears flow.

Some of you may remember that David Kandel and I drove up to Camp 3 years ago and posted our adventure to the blog.  So, in the spring we were discussing doing it again and settling on a date for our trip. When we selected 8/13 little did we know of the events that would precede our visit, and how it would affect our actions that day. In anticipation of our trip, David contacted Mary, the lady we met during our last trip, whose magnificent house sits on the lip of the Misdar grounds and the sloping hill below leading to where the Machanaim court was, to let her know we were coming and to see if she had found the Camp sign she said that she thought she had seen in the Arts and Crafts building.


Thursday August 13th was a sunny morning here on the east coast as I set out to meet David in Ramapo from where our journey would begin. Took the LIRR to Penn station and changed for Metro North (….”Charlie handed in his dime at the Kendall Square station and he changed for Jamaica Plain, when he got there the conductor said one more nickel, Charlie couldn’t get off of that train…”  ;-).  Upon arrival we went for breakfast at Yoffee’s, a little place that David had a gift certificate for.  Food wasn’t bad, but what is breakfast w/o fries?  David wanted to make two stops on our way north – first at the Red Apple Rest and second at a shooting range in Goshen (no, not Egypt silly) to blow off some steam with the pistol that he had not yet used.

So with David in the driver’s seat and me riding shotgun (pun intended) off we went. We’re on Rt 52 and there she is - the Red Apple Rest.  How many camp buses stopped at this famous piece of real estate over the years?  But the old lady has some serious cosmetic issues (the old gray mare, she ain’t what she used to be).

After a little reminiscing and one last photo, we head off to Dick’s Sporting Goods so David can buy ammo and a clip, and then to the range. 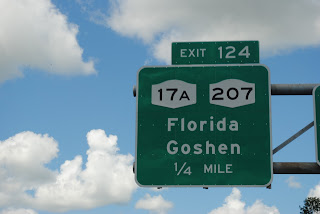 As I said, the range was in Goshen, so we had a good laugh about that.  When we got there it turns out that I can’t shoot the pistol since I do not have a pistol license. So I get to watch David blow the targets away while almost blowing his thumb off.

On our way out, there are two kids shooting a 22 rifle and David explains to them what happened and they let me take a couple of shots – ah how refreshing.  Next stop Liberty to take a quick look and to visit one of David’s friends who owns a car repair place – one of the guys waiting for his car was studying Talmud. 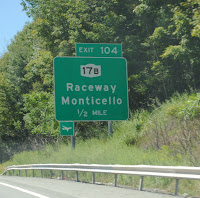 So we’re now on the Rt 55, and of course we need to stop in Bradley. The sign is no longer there, but we did a slow drive through the back roads of the tiny town and then we head to the reservoir – still beautiful as ever. While I take some pictures, David calls Mary to let her know we are almost there.

On the road again – Shields Road – Corby Road - and then we see it – the Arts and Crafts building and the vacant space where the main house used to be. 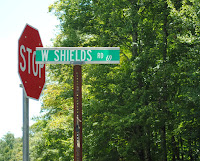 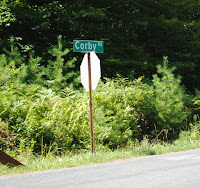 We drive up Hornbeck Road which was basically paved from Corby Road onto the path in front of the Chadar Ochel. We park the car and as our feet hit the ground something shoots through my body. No, it wasn’t ecstasy on being on sacred ground; turns out I stepped on a rock! After I recover from the shock, I do a 360 degree shoot from the direction of the Misdar grounds going clockwise.

We meet with Mary, who was unable to find the sign she mentioned. I show her my album of camp pictures to help her understand where things were, give her a CD I made, and then David and I go for a stroll.  Down the main road to the Arts and Crafts for a quick look around, then back up to the obstacle course where we find an old rusted out bunk bed frame and one of the dryer drums from the laundry – you couldn’t imagine our expression of disbelief!  We try to get to the rifle range and the “road” down to the lake, but the area is totally overgrown and we turn around.

And then we stop on the baseball field. As I mentioned at the beginning, events had recently transpired that would change our reason d’être for making the trip. Our chaver, our counselor, our madrich, our mefaked Benny Rosen – Binyamin Faivel Ben Chaim Leib v’Hinda, who had been very ill for quite some time, had just passed away. As a matter of fact he had passed the day before we went up to camp and the funeral was on the day we made our trip.  When I heard of Benny’s passing I told David that we needed to do something special while we were up at camp, but I wasn’t sure what. And then it came to me – I would sing one of Benny’s songs (That's the Story of My Land), bury the pages (of all his songs) on the baseball field and David would say Tehillim – and that’s what we did.

So after our farewell to Benny and Camp, we take a right to see if Corby’s place is still standing (it is),

then into Neversink for a quick look, and then off to Grahamsville. Why Grahamsville you ask? – well, Big Benny said we had to, and no one says no to Big Benny.

Then we take the back road to Woodburne where we stop for our Kosher Pizza Lunch. 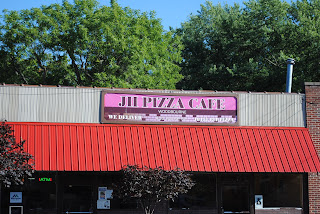 After lunch we start our drive back to Rt 17 and pass numerous kosher and religious establishments, attesting to the fact that yiddishkeit is alive and well in the Catskills. 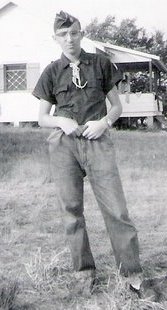 Wonderful and suited blog post.
Nice that you posted it.

You took us on a real journey through our own recollections of the wonderful times we had in camp and Bet Sefer.
Your tribute to Benny was exceptionally moving.
Frank

To one and all, I hope this post has brought back great memories of camp and of a great person. While we miss those camp days,we miss Benny that much more. May his name be for a blessing.

This post is one of the only 18 in the Shiloh Musings: My "Alternative International Jewish Newspaper," aka HH*